Britpop legends Shed Seven have announced they are coming to Dundee for an “intimate” concert ahead of their UK tour.

The band will be performing a warm-up Gig in Dundee at Duck Slattery’s Live on November 22.

Support for both warm-up gigs will be provided by rising stars of the indie music scene, Shambolics, who hail from Kirkcaldy 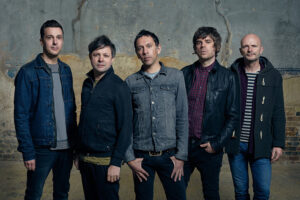 Shed Seven are a Britpop band from the UK city York, North Yorkshire who formed in 1990. They were famed for their no nonsense good time tunes and live shows. Their most popular songs included Chasing Rainbows, Going For Gold and Disco Down. The band split in December 2003, but not before a farewell tour which culminated in a final show in their hometown of York. The split was amicable and came about due to disagreements with their current record company about the direction they wanted them to take musically.

They released a posthumous collection of demos for what would have been their fifth studio album in 2005, which were critically acclaimed. Frontman Rick Witter went on to form Rick Witter and The Dukes, other band members also started their own projects. In 2007 Shed Seven reunited for what was to become a sell out tour of the UK, and their most successful tour to date. The re-formed line up included all the original members, including both of their former guitarists, Joe Johnson and Paul Banks.

In September 2007 Universal Music and Polydor Records announced the forthcoming release of a double CD featuring the best of Shed Seven’s BBC recordings, which included some of the their biggest hits (including “Going For Gold”, “Dolphin”, “On Standby” and “Getting Better”) alongside lesser-known album tracks and B-sides, all recorded between 1994-1997 at BBC’s Maida Vale studios or for its Live In Concert broadcasts.